A Home with a Heart 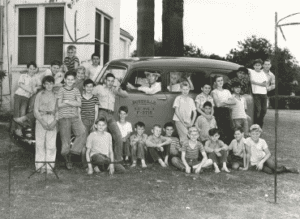 Boysville, the Home with a Heart, was founded in 1943 as a result of Rev. Don Holiman’s observation of orphaned, homeless and abandoned boys sleeping in San Antonio’s Travis Park. The local police picked these boys up from the park in an effort to provide some safety and shelter for them. But because they had no other place to take them, the police took them to a detention center even though they had not committed a crime. Holiman knew someone needed to help these boys, and thus Boysville was born.

Local police knew of Holiman and his desire to help children. So they began bringing boys to the “Mansion” on Avenue A – a home provided by local businessmen to help support the boys. With financial assistance from the San Antonio Kiwanis and the Optimist Club of San Antonio, Boysville became a San Antonio tradition. Boysville was known from the beginning as “A Home With a Heart for Boys.” 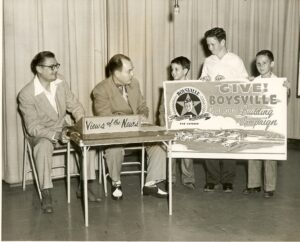 Throughout the years, the mission remained constant. Boys came from broken homes and abusive situations. They were provided a safe caring home and a chance to gain an education. In need of more space, the home moved to a rural location in 1953. This move allowed Boysville to grow and support up to 78 boys in a farm-like environment. The boys raised animals, did chores and went to school – responsibilities that would serve them well as adults. It was in this setting that the boys learned that family life does not need to hurt. In fact, it can and should be fun! As Boysville grew, so did the campus. In 1983, Boysville moved again to its present location on 78 pastoral acres on Loop 1604 near Judson High School. This move allowed the home to expand to offer a home to 96 boys.

Boysville continues to rise to the occasion. In 1986, in an effort to keep siblings together, Boysville began accepting girls into the program. Later in 1995, Boysville added an emergency shelter to allow for the placement of boys and girls coming from a crisis situation. This expanded Boysville’s capacity to 124 boys and girls. In 2004, again to continue meeting the needs of families, Boysville expanded its continuum of care by accepting its first infants onto the campus as a sibling group of five needed immediate help. Boysville now cares for children of all ages, birth through college or vocational school. The mission is simply stated, “Helping boys and girls become responsible adults.” Boysville has a unique policy of never turning away a child for lack of financial resources.

Care from Cradle to College

A major component of Boysville’s program to help boys and girls become successful adults is the Boysville Supervised Independent Living Program (SIL). It is designed to assist youth as they transition from high school into adulthood.  Boysville’s SIL program offers housing, clothing, food and living allowances as well as case management. Through the Boysville Foundation, young adults are offered scholarships to help offset educational costs.

Boysville has been able to serve the San Antonio community for 77 years and will continue to move forward. We will continue fighting to break the cycle of abuse and neglect in families while preparing children for success in adulthood.